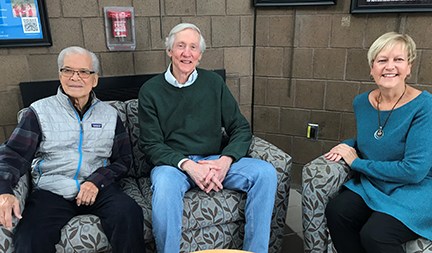 Medicare beneficiary, Henrietta, found out the hard way that signing up for a Medicare plan isn’t a slam dunk.

When the Novi resident, a registered nurse, retired in late 2020, she signed up online for a Medigap plan, which covers some coinsurance, copays and deductibles. She paid $277 per month for the plan. She also had Part B and Part D (prescription drug) plans, both of which have separate premiums. As someone who worked in healthcare, Henrietta was confident that she knew what she was doing.

Then last November, during the open enrollment period when Medicare beneficiaries may change their Part D plan, she learned that she was likely overpaying for her Medigap plan. Way overpaying.

Henrietta called on John Howland, a counselor with the Medicare Medicaid Assistance Program (MMAP), part of the Area Agency on Aging 1-B. Howland had helped her partner, Carlos, go over his Medicare plans in the past and came with a great recommendation. Howland, also of Novi, helped Henrietta review her Part D plan for 2022 to make sure she was getting the biggest bang for her buck. She was.

As an afterthought, Howland asked her about her Medigap plan. The monthly premium seemed too high to him, so they began investigating. It turned out that when Henrietta signed up, she accidentally checked a box that put her in a higher price bracket. Because of a lack of stopgaps in the application, she was paying more than twice as much as she should have, going back to February 2021. She didn’t know that until Howland pointed it out.

Henrietta 66, contacted the health insurance company to question the charge, without luck. She turned to Howland, who drafted a letter on her behalf. Just before Christmas, she received a letter from the company granting her appeal to lower her premium. Not only did the rate decline to $120 per month, but the company provided her with retroactive overpayments back to March, amounting to $1,441.

“I don’t know who was more overjoyed – John or I. I never thought it would happen. I told John, ‘If this goes through, I don’t care if I get reimbursed. As long as my rate goes down, I’m happy,’” says Henrietta.

Going forward, she will save $1884 per year – probably more because of rate increases — thanks to the review by MMAP’s Howland.

“You’ve got to know that I’m in healthcare, so I more or less deal with this quite a bit,” Henrietta says. “Yet, I couldn’t believe how ignorant I was when it came to doing everything for myself.”

MMAP counselors like Howland have no agenda other than to make sure Medicare beneficiaries are enrolled in the best plan for their healthcare needs and budget. They work free of charge year-round.

Howland, who has been a MMAP counselor for about 6 years, says helping Henrietta was the highlight of his MMAP counseling career.

“She spent two hours on the phone with the insurance company trying to find the right person to talk to” he says of Henrietta. “She was frustrated. When she finally got someone to listen, they told her she had made a mistake and there was nothing they could do about it.  I was outraged.”

Howland wrote a letter to the health insurer with the help of his MMAP supervisor, Loretta Mack, and got somebody to fix the mistake. They finally did.

“It was a helluva way to start the new year,” says Howland. “It’s the most wonderful experience I’ve had in any volunteer activity, ever.”

For her part, Henrietta says she was overjoyed at the outcome – and sent a donation to support the MMAP program.

“I was just so overwhelmed with the whole process going through the way it did,” she says. “Things like this don’t happen.”

The Medicare Medicaid Assistance Program (MMAP) provides unbiased help with Medicare and Medicaid – at no charge. Our certified volunteers answer questions, troubleshoot problems and help people understand their plan choices. Government grants allow us to offer impartial assistance for free. You can reach MMAP at (800) 852-7795.