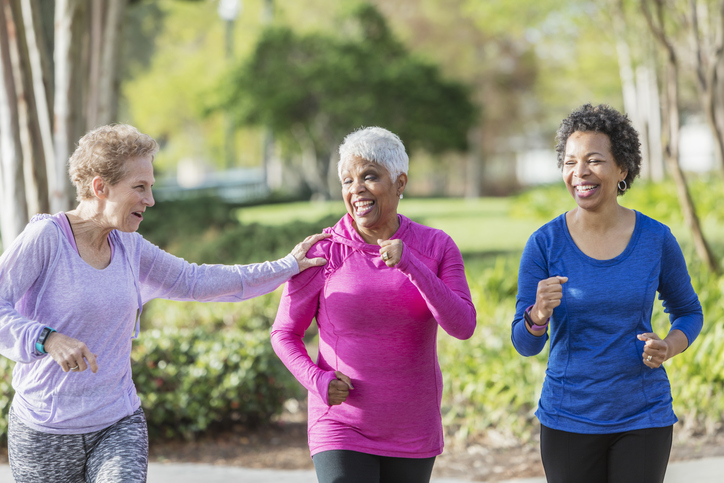 Let’s face it: Taking control of your health requires willpower. Having others along the journey can make it much easier to find it.

The Area Agency on Aging 1-B offers an array of free health and wellness workshops that are heavy on class participation, a key ingredient to a student’s success.

“A lot of times, when people sign up for a class, they think it’s going to be a lecture,” says Jeannine Roach, MSA, manager of health promotion at the agency. “But all of our programs are evidence-based and follow the lay leader model.”

Class leaders are peers, not experts – and they’re told to leave their nurse or businessperson or teacher hat at home.

“We tell them, ‘We’re giving you the content and you’re facilitating the class. It’s not a lecture; we’re learning from each other,’” says Roach.

The agency’s Health and Wellness program includes year-round workshops and training for caregivers and for people facing health challenges, including two PATH (Personal Action Towards Health) workshops people with diabetes and chronic pain. The PATH model was developed at Stanford University.

PATH offers techniques like distraction and deep breathing to lift the depression that often accompanies chronic medical conditions and to break the symptom cycle. Gentle group exercises are part of the mix, too.

Patrick Brannon took a PATH workshop through AAA 1-B in 2011 after learning about it in a stroke survivors’ group at Garden City Hospital. His wife Vicki had to push him to go; he had spiraled into a depression after a massive stroke in 2008 left him paralyzed on his left side. He was only 58 at the time.

“I was opposed to going, but by the second class it dawned on me that people there had severe limitations and of myself,” says Brannon, 71. “I had to drag my left side along, but so what?”

At the end of the 6-week workshop, Brannon offered to train as a co-leader in the PATH program. When he told his wife, Vicki burst into tears, overcome with gratitude: the man she knew, an ambitious entrepreneur who had built a successful construction company, was back.

Brannon has been co-leading workshops and loving it since. But he also attends PATH classes as a student because he believes they help to keep a person on track toward better health. The Diabetes PATH class helped him to eat healthier – and to maintain a consistent blood sugar level.

“I got off my meds and had pride and purpose again,” he says. “When I see people’s lives change when they embrace the tools, you can see it. You can see the lights coming on.”

The PATH workshops require participation. Students are called upon to talk about their goals and to help each other reach the ones they set out for themselves in the action plans they create in class. They are often fun, helping students to see the humor in their personal situations. One visually impaired student related that her talking scale announced her weight loudly enough for neighbors in her apartment building to hear.

Even in a virtual setting during the pandemic, students were accountable to each other. Cameras had to be on, and students were responsible for contributing ideas, says Roach. In every class – including PATH, Matter of Balance, and Aging Mastery, students brainstorm ideas that become the basis for a list that is used to help each other deal with their health challenges.

“A lot of knowledge and information comes from individuals who are participating,” says Roach. “You’re able to engage with other folks who are going through the same thing and having similar struggles. There’s something important in supporting each other and helping lift each other up.”

She is planning for in-person classes beginning in September if it is safe to do so. The virtual workshop experience helped people feel less alone, Roach says, and it may be a good option in the colder months when students don’t feel like going out.

Lynn Martin of Sterling Heights has taken most, if not all, of the PATH classes offered through AAA 1-B, which are held at the Sterling Heights Senior Center. She likes the camaraderie and has learned a bit about managing her type 1 diabetes.

“I knew there were some things in there that would help me start eating healthier and controlling emotional challenges,” she says. “You get depressed from having to take shots every day. I wanted to better understand my readings and have my sugar under control. I haven’t had over 200 in a couple years because I learned to watch what I eat.”

Martin, 73, walks and eats a banana, apple and grapes every day. Her step-counting device helps to motivate her.

“I practice what I learned so I can get better and continue on the path I’m going,” she says.

PATH Students receive a book and CD to keep and help them stay on track.

The Area Agency on Aging 1-B offers Diabetes PATH and Chronic Pain PATH workshops. For more information about these and other workshops offered by AAA 1-B, call 833-262-2200, email wellnessprograms@aaa1b.org, or go to https://aaa1b.org/senior-health-and-wellness/.