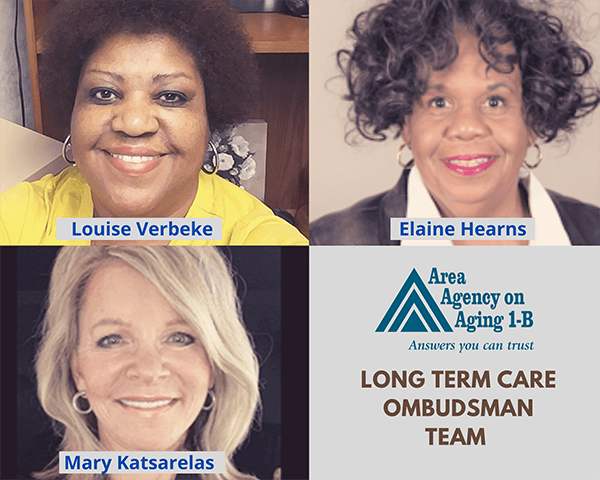 A trio of ombudsmen that works out of the Area Agency on Aging 1-B are among 21 ombudsmen statewide whose job it is to protect and advocate for residents in Michigan’s long-term care communities like nursing homes and licensed assisted living facilities.

They typically work in person, talking to residents and staff to make sure facilities are following state regulations and that residents are getting the attention they need. Covid restrictions prevented them from going into the nursing homes, but as of April, they’ve been allowed in on an as-needed basis.

“Up until now, we’ve had to get permission to go into a nursing home by the state. We used to be able to go into a home and be face-to-face with staff and residents and let them know the resident has rights,” says Louise Verbeke.

Their reports are filed with the state LTC Ombudsman office. State surveyors regularly interface with ombudsmen about complaints or issues they ombudsmen have identified.

Helping Families During the Pandemic

Over the pandemic year, the ombudsmen fielded many concerns from families unable to visit their loved ones because of Covid safety protocols. They heard complaints about a lack of staff. They heard from residents of assisted living facilities who could not get out of their leases.

From March 2020 to now, “it felt more like being a counselor,” says Hearns. “The majority of my calls were from family members who were very stressed out because they weren’t in touch with their loved ones. I heard a lot from people in mourning because they lost a loved one.” Residents could not understand why the ombudsmen couldn’t come in.

“Somebody’s on Their Side…”

“Our physical presence gives them some kind of leverage. When we’re there, they feel somebody’s on their side,” Hearns says.

In normal times, their job often puts them at odds with nursing homes, which have their own struggles, often with maintaining staffing levels. Residents may not be getting the care they need, and if they lodge a complaint, the ombudsmen follow up with the home. They would go to the state if the problem escalated.

During the past year or more, the ombudsmen have been communicating with often distressed families and loved ones about the visiting guidelines  from the state Department of Health and Human Services and Centers for Medicare & Medicaid Services.

And while many nursing homes are now allowing family members to come in, some turn them away because of the risk of infection to unvaccinated residents or staff, or because they don’t have staff to facilitate the visit. In an early CDC survey of vaccination programs at nursing homes, almost 80% of residents took the vaccine while under 40% of the staff did.

The ombudsmen are still doing what they can to connect families with their loved ones and to otherwise continue advocating for residents, “whose rights have become so much bigger and more important,” says Katsarelas.

“We’re trickling in one at a time and making sure people know about the Long-Term Care Ombudsmen Program,” she says.

“I’m just communicating with as many residents and family members who call me,” says Verbeke. “We have to let them know, ‘Hey we are still out here, we’re doing our best to advocate for you.’’’’

The MLTCOP strives to improve the quality of care and quality of life for residents of nursing homes, homes for the aged, and adult foster care homes. The program has local ombudsmen located throughout the state. Ombudsmen make frequent visits to facilities and work directly with residents to resolve their problems. The State LTC Ombudsman Program uses the knowledge gained at the local level to educate policy makers and the public and promote improvements in the long-term care system. The MLTCOP is funded by the federal and state government. All services are provided free of charge and are confidential. An ombudsman can be reached by calling (866) 485-9393.